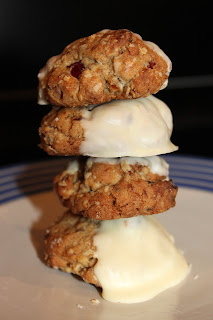 
What fun!  I joined into a fabulous worldwide cookie swap organized by The Little Kitchen and in aid of charity called Cookies for Kids.  I have recieved 3 different types of cookies from 3 people I have never met, living in various places in England.  I sent a dozen cookies each to 2 people in England and 1 person in the Republic of Ireland.  My goal was to find an American style cookie that would be sturdy enough to handle being mailed.  I tried the banana cookie first, but it was not sturdy enough to post, even though it was really good! 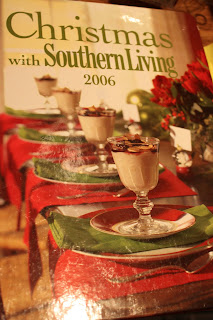 Then I considered doing my favorite cookie of all time, a Snowball.  This was the first cookie recipe I learned way back in the 1950's and has always meant Christmas to me.  However, one of the people who I was sending my cookies to published a variation of the Snowball recipe -  so I resorted to a book I never used before, but always intended to - the Christmas with Southern Living 2006.  My Mom sent me this in, oh!  2006!  This was listed as the "editor's favorite - gift idea - make ahead".  So I decided this had to be it! 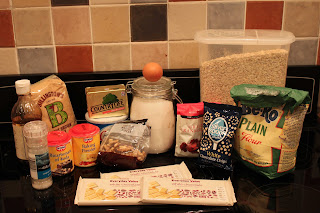 One of the things I have learned through doing a food blog is assembling the ingredients before beginning to cook or bake.  This is a great idea and I think is always suggested anyway. But I had never done it before and find the process very beneficial.  Not only is it all there when you need it, you also know what you don't have instead of waiting until the middle of a baking project to find that out.  So early on, I knew I did not have enough cranberries or nuts.  But that didn't stop me!  I decided to add chopped dates and not worry about not having enough nuts. 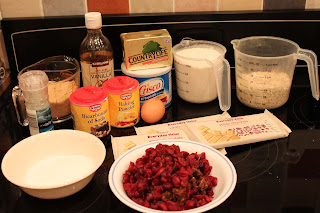 adapted from Christmas with Southern Living 2006

3 -  4 ounce white chocolate cooking bars, coarsely chopped
3 Tbs shortening (I have no idea what would be the substitute for shortening!)


Using an electric mixer, beat butter until soft then add both sugars.  Beat these well before adding eggs and vanilla.

At this point, the dough is very, very sturdy.  So much that it actually bent the beater on my blender.  I wondered if I had forgotten something or maybe my egg was not large enough.....not sure. But the cookies turned out ok and I will try again to see why.  But also remember, I didn't use the amount of nuts called for. So it could have been alot worse! 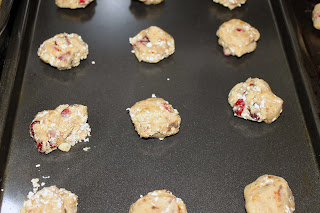 Using lightly greased cookie sheets, the recipe calls for the dough to be "dropped by heaping teaspoonfuls 2 inches apart, but this dough did not want to "drop" so I had to handle it a bit and make it into cookie size pieces, this worked out fine and they don't spread as much as I expected. 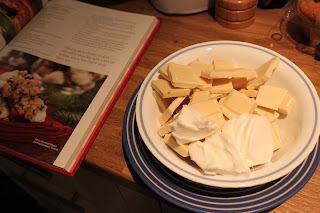 Melt the white chocolate and shortening in bowl suitable for use in the microwave on the lowest setting to make sure you don't overwork your chocolate. 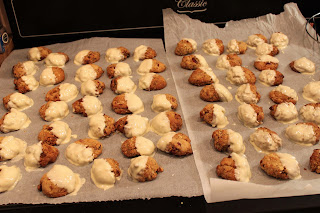 Dip each cookie into the chocolate.  This can be messy, so it is a good idea to hold the dipped cookie over the bowl to allow the chocolate to drip back in.  Put cookies on parchment paper until the chocolate cools and becomes firm.

I got about 4 dozen which is what the recipe promised!

The recipe says dipping these chunky cookies into white chocolate adds a special holiday touch, but they're great plain too.  And I can vouch for that. The chocolate is good, but not essential.

After baking these cookies, the challenge was then to package them and get them in the post on time, which I managed to do: 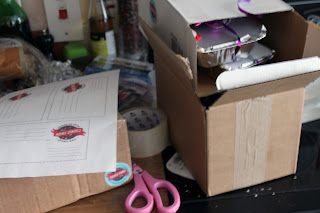 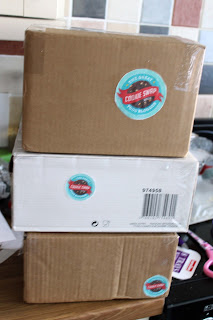 Just a wee note -  3 Tbs of shortening was too much, it made the chocolate too runny, so I had to add extra. I can only guess that the need to add shortening would be to make the chocolate a bit less brittle, sort of like adding oil to chocolate in a chocolate fountain. I used Crisco, this is something I rarely used even when I lived in the US. But it is essential in some American recipes and one of the costs of visiting me! The other things guests are requested to bring me from the US are chocolate chips and sweet pickle relish!

"Christmas is the season for kindling the fire of hospitality in the hall, the genial flame of charity in the heart." - Washington Irving

I would love to hear from you on my Facebook page:
https://www.facebook.com/patsnewkitchen 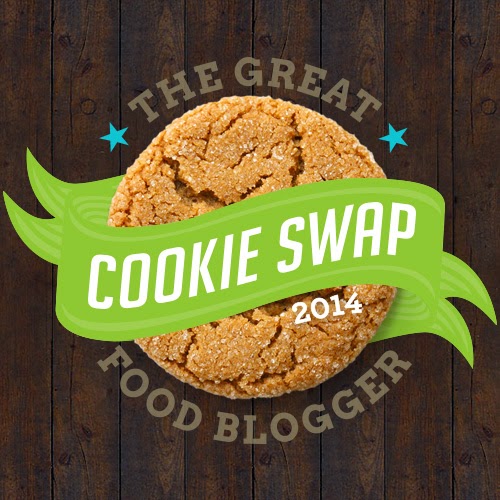